So here I am for the second week house and catsitting. It feels good to be all alone after the shock I got at the beginning of the week. It’s too bad this is the last weekend I’m doing this. The effects of my shock? I’ve been smoking again. I intended to buy a single cigarette but couldn’t find those kinds of street vendors and I ended up buying a whole pack, which I’m quickly running out of. The second effect: I’m sleeping. All the time. And when I’m not, I’m just sleepy. Can’t walk for long, can’t watch a movie, let alone read. Can’t do anything that requires a regular amount of energy, and I can’t bring this up with anyone because I can’t really talk about this freakin’ thing that’s got my world upside down, and I know most people will pin it on my weight loss and turned it against me, trying to show me how I’m hurting myself or something, so I’m left all alone. Truth is I hadn’t felt so tired in the days leading up to the big news, that’s why I’m thinking both things are related.

Still, it’s true that I’ve lost weight. Remember I told you I’d lose 20 pounds by my birthday? Well that was in April, I’ve lost 26 pounds, and the weight keeps coming down. I definitely don’t think I’m at a dangerous weight , but I know I can’t stop. Every time I step on the scale and it shows me I weight just a little bit less, I’m glad… and terrified that I might gain that weight back. I’m also starting to get people sticking their noses where they don’t belong, not just absent-minded comments about how thin I am, but people such as coworkers asking if I’ve already eaten today, trying to force feed me Ensure or  other kinds of nutritious food. I don’t want to take them. If being healthy means gaining weight, I don’t want to be healthy, period.

N is convinced I’m an anorexic, and her treatment includes it as one of my biggest issues. I asked Mr. Shrinky if he though that too. Surprisingly, he said he wasn’t so sure, that he sometimes thinks I stop showing symptoms for long periods of time and that makes him wonder. I wish I’d gone further with my questioning because I don’t know what he meant by symptoms, it’s such an equivocal word and there can be so many of them.

In any case, what I really think is I’m tired, fatigued out of my mind, and I just wish I could rest just a bit. I wouldn’t even say I’m depressed or sad, I’m just fucking exhausted up to my brain cells. I thought I’d be able to rest after the Final Presentations, but that hasn’t been the case. The stress has obviously been diminished enormously, but there’s a huge amount of work at Mount Olympus, which is a complete havoc right now with elections going on, and I’m also preparing to move in one week (GOD I HATE PACKING AND UNPACKING!). Plus, the stress at school is peaking dramatically, with everybody playing mental chess thanks to the owners’ totally no-nonsense idea to keep the rehirings for the next school year for to the last possible moment and finally, the goddamned emotional stress I’ve been subjected to this week was beyond belief.

I’d just like a quiet time, with no alarms and no surprises…

Still, no matter what, I’m going to the beach in six weeks, I won’t have to work any of my two jobs for some weeks too, and I’ll be with BF which is great, because I’m starting to feel like a zombie. . 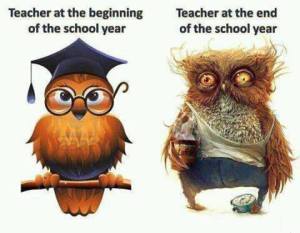 11 thoughts on “No surprises (please)”