I’ve become more and more secluded in my own thoughts and my inner reality that I am less and less able to write here, mainly because I used to be open about everything. But I’ve been violated so much by … END_OF_DOCUMENT_TOKEN_TO_BE_REPLACED

I don’t consider me a New Year’s Day Grinch, but I do wonder what the fuzz is all about. The firts day of the year is always a dead day, nobody’s out on the street, everything’s closed, and your supposed to enjoy the quietness and calm around you. Well, I don’t. Even more, this calm worries me because I fear that’s one of the reasons why Sundays are so hard on me. That’s what it’s come to, I’m feeling just a hint of a chest pain, but I’m terribly scared of what it may become as the day goes by, because it can get so strong it amazes me it doesn’t kill me. So I’m gonna try to keep busy, probably reading and working on the Frankenthesis. I haven’t finished a couple of books and I might get to that.

As for the thesis, I didn’t deliver what I was supposed to in December, and now I have a lot more work to get done by Jan 15th, and I’m not sure how exactly I’m going to manage to get it done. If only I’d type on it as many words as I have on this blog, I’m sure I would’ve finished it by now 🙄 and I have to admit I need all the cheering up I can get to work hard and maybe finish what I’m supposed to.

This time around, New Year’s Day is reminding me of everything I didn’t accomplish, of all the different ways I messed up, and all the problems I got myself into, money being the most worrying one. I guess I’m feel a little ripped out because people act as if  on Jan 1st everybody got a clean slate, and I don’t see that. What I see is a reminder that time keeps going by, it doesn’t stop and everything we do keeps adding to our tab.

All I got left, and I realize it’s a very big thing, is the hope that things will get better, and man do I need a brighter horizon to keep me going right now! Hope is the fuel that so many times keeps our engines running when all evidence says there’s no point. And today I can be thankful that I do feel the warmth of hope (however small it may be) in my heart to keep me going.

I realize this is a bittersweet post (that’s a little more bitter than sweet), but still let me take the time to wish you all a happy 2013 full of happy moments and goals achieved, and a year that brings you as least sorrow as possible! 🙂 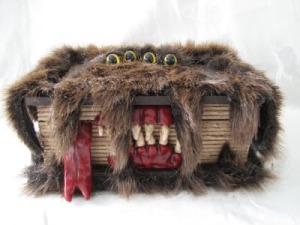 What the Frankenthesis looks like these days.
(Image credit: http://www.craftycrafty.tv)

Here we are again!

I’m happy to report that today wasn’t all that bad, mainly because I got to be home alone, yay! I didn’t get any work done though, boo 😦 I’m not even in the writing mood anymore so I’m gonna keep this post real short like yesterday’s. Besides being left alone, I think my not-so-dark mood today has to do with the fact that vacations are starting to look closer, and then it’s beach time!

If there’s a place in the world I love, it’s the beach, and the ocean. It may be cold, hot, gray, clear blue, I’ll take it in any flavor any time any day. One of my biggest wishes is living by the ocean, and I’m sure I’ll get to it someday. It’ll preferbly be somewhere outside of Mexico.

Can’t wait to get outside of Mexico: “Today I address mexicans for the first time as their president” F*ck! (And by that, I mean FUCK!) Our elected president took office yesterday, together with his mostly pre-cenozoic cabinet secretaries that guarantees us the return of one of Mexico’s darkest ages (and that’s saying something). His party ruled over more than 70 years with corruption and nepotism as its strongest weapons, and it doesn’t seem like it’s gonna be any different now, because, well, nothing’s changed. Nothing, except at least 60,000 deaths in the past six years alone. Are those good reasons to want to leave Mexico? Well, there’s that and the language. I know I said on December 1st I wouldn’t be angry, just sad at the way my country’s choice, but I was mad, I am very mad. Is it never gonna be time here in Mexico for a head of State that actually deserves being called that? Why does it seem like the other big names in Latin America are moving beyond their limitations and growing into strong, truly independent nations, and Mexico is as always stuck in the same ol’ same ol’?

In other news, I just got a new book, another yay! It’s When Nietzsche Wept by Irvin Yalom. Partner gave it to me yesterday, looking forward to my new reading, and let’s hope it keeps me entertained enough to stop my Sunday-afternoon-presidential depression from growing.

Hopefully by tomorrow I’ll be sane enough to be able to write a post that’s actually about something, until then!